We are now closed until further notice.

Because of the coronavirus pandemic the Newtown Textile Museum was not be opened on 1 May as originally planned. We are monitoring the situation closely will aim to open as soon as it is considered safe to do so, which we hope will be later in the summer.  We look forward to the time when we can welcome visitors through the doors again.

In the meantime, why not explore the Museum through these pages. Our new Come-inside page had detailed descriptions of some of our objects, with links to more in-depth articles. Try our online jigsaws too.

Everybody needs a FRIEND. Now, more than ever it would be wonderful if you could help us keep the Museum open by becoming a member of NTM friends.

We rely on donations to run the Museum. Even when we are closed, there are still running costs that need to be paid. Help us ensure that the Museum will survive.

NB If you would like to check out our  2020 financial situation, a report from our Treasurer is now available here.

Go to the How to Help page to find the membershipforms or just help us with a donation.

When we are able to open again, the opening  hours will be Tuesdays, Thursdays, Fridays and Saturdays:

Entry is free (but donations are encouraged) 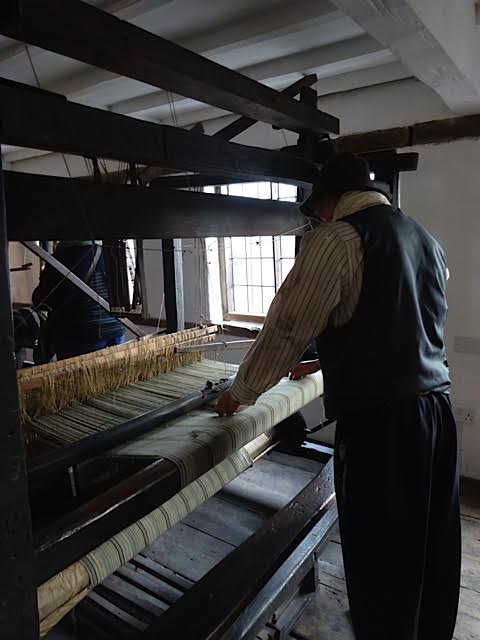 Now rated as the No 1 attraction in Newtown by Trip Advisor.

The Textile Museum in Newtown - just over the bridge into Commercial Street, (see the map) gives visitors a chance to see how the handloom weavers of the mid-19th century lived and worked.

The block which houses the Museum was built in the 1830s as a hand-loom weaving factory, the looms occupying the top two floors above three pairs of two storey back-to-back houses on the lower floors.

Newtown's development into a centre of industry is described through exhibits in the former cottages. On the top two floors the story of fleece to flannel is illustrated by looms and spinning wheels, alongside displays of related industries and influential local people such as Pryce Jones.

We also have exhibits of modern wool craft and demonstrations by experts in spinning, weaving and quilt making.

We hope you will find the Museum an interesting and enjoyable place to visit.