Did your ancestors live in Penygloddfa in the 1800s? Were they working in the Woollen Industry?

We are working to establish who lived in the six cottages that now form part of the Museum. Data has been extracted from the censuses taken every ten years between 1841 and 1911 that are currently accessible.

In all censuses prior to 1911 the residents of the whole area designated as Penygloddfa are included in these lists (on the right).

It was not until 1891 that it became possible to be sure about who lived in each house but even then not all the houses had numbers.  In the 1901 census unfortunately the house numbers of often not recorded, including No 5 - 7 Commercial Street, so we cannot confirm the residents of our building. What is clear is that there were different residents in those houses from the 1891 census.  The 1911 census just shows the residents of our building.  There no plans at present to complete the rest of the 1911 data.

Do get in touch if your ancestors appear here. You can search the pdf files to find the families of interest.

This small area of Newtown, shown on the right, has been chosen because it includes the area surrounding the Textile Museum.  It reflects the huge changes in the town during the 1800s and particularly for this area, the period after 1827 when the Long Bridge was built, and the woollen industry was at its peak. There is a very noticeable change in the occupations of the residents over the 60 year  span. It is also clear that this was not a very Welsh-speaking area.

Open the document and look for your ancestors and their occupations. As work has progressed on this task it has become  obvious that it is better to keep households together, rather than sorting the data in other ways.

1841 census for Penygloddfa, sorted by street, by surname.

1851 census for Penygloddfa, sorted by street, by surname.

1861 census for Penygloddfa, sorted by street, by surname

1871 census for Penygloddfa area, sorted by street and surname

1881 census for Penygloddfa area, not sorted by street or name.

1891 census for Penygloddfa area. Not sorted by street or name but as entered on census.

1901 census for Penygloddfa area. North of Commercial street in first section, South in second group. As entered on census. 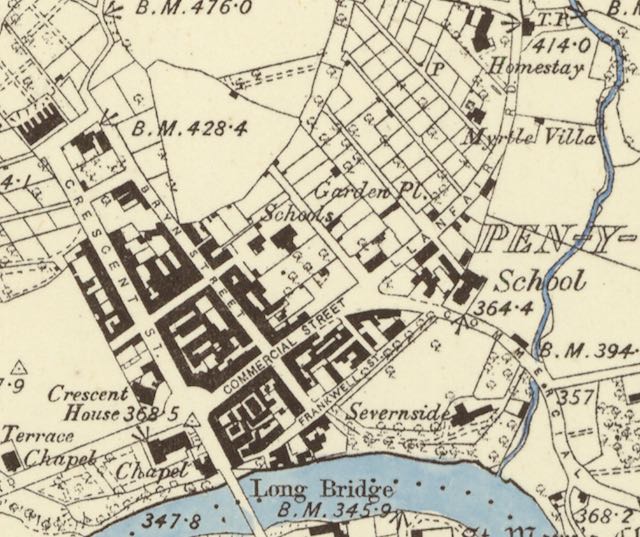 A place with a past

This is the most recent  article in the series written by John Evans, one of our Committee members, devoted to the history of the town and of the building which today houses the Newtown Textile Museum.

‘Oh what a blissful place! By Severn’s Banks so fair

Happy thy Inhabitants: and wholesome is thy Air. . .’

The hyperbole of Parry’s Ode masked the reality of the conditions for workers in the flannel industry in the early nineteenth century. For centuries the industry had been scattered throughout the rural hinterland of Montgomeryshire, but at the end of the eighteenth century it had become centred in Newtown itself. The town became a magnet for those poor agricultural labouring families in search of better housing and higher wages.  Nevertheless, working conditions remained grim for families like those who moved into our Commercial Street weaving shop.

This short video of images and details about Newtown's Flannel Industry has Welsh and English sub-titles.

For more information on the history of flannel, and the story of Newtown, click here.

The Museum tells the story of one family who lived in Commercial Street in 1841 -  Thomas and Mary Clayton.

Come to the Museum and find out more about Mary, Thomas, and Samuel Evans, a Factory owner. 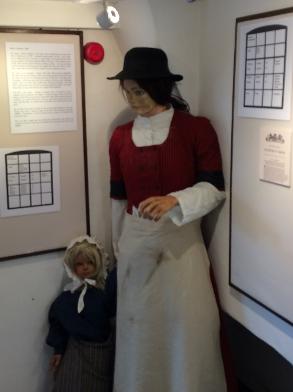 An extract of Mary's family tree is also available here - thanks to one of our visitors.

This was the first in a series of short articles  written by John Evans, one of our Committee members, devoted to the history of the building which today houses the Newtown Textile Museum.

These articles are intended only as a brief introduction to the history of the Museum, rather than a detailed historical account, but hopefully they will be of interest to all our readers .

At the end of the 18th Century, Newtown was still a very small town with a population no greater than a modern day village. Yet within the space of forty years, it had developed beyond its medieval boundaries and its population had grown to 7,000 people. In the process it had acquired the epithet of ‘The Leeds of Wales’.     continue reading...

This was the second of John Evan's short articles devoted to the history of the building which today houses the Newtown Textile Museum.

The Origins of the Museum Building

Up until the end of the eighteenth century, the production of woollen flannel had been a small scale cottage industry carried out in the homes of the rural population. But at the turn of the century conditions were changing, making for the possibility of greater organization of the industry within the urban areas of Montgomeryshire. External factors, such as war in Europe against Revolutionary France had created an increased demand for cloth from which to make the uniforms of soldiers fighting against Napoleon’s armies. At the same time, within Montgomeryshire too, things were changing...

Another in the series of short articles  by John Evans about the history of  weavers in Newtown.

The Textile Museum at 5-7 Commercial Street was constructed about 1830 at a time when Penygloddfa was developing rapidly as the result of the boom in the Welsh flannel trade. Unfortunately, we cannot identify the first individuals who would have moved into the six back-to-back dwellings, but we can surmise that they had been drawn to the area by the prospect of work in the handloom factories... continue reading Thomas Clayton's story...... 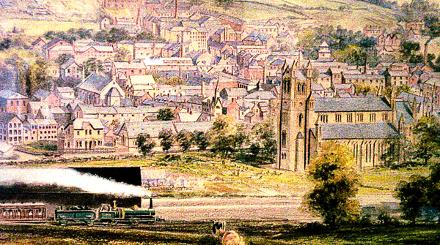 This delightful painting of Newtown in 1858 now hangs in the Textile Museum. It is a very popular exhibit, especially now that it has been rehung with better lighting.

Read more about this painting...